Full Name: Sierra Raye-Ann Preston
Real Age: 16
Physical Age: 16
Height: 5'9"
Race: Vampire
Ability: Psionic Blasts (basically this means I can overload someone else's mind and cause pain, memory loss or unconciousness, but it's not powerful enough to acually kill on the spot. I got permission to change it).

Dislikes:
- Being told what to do
- Spiders
Turn-ons:
I'm just not gonna bother... o_o


Personality Description:
Sierra is vivacious, and somewhat charismatic to her friends. She is quick and eager to make new friends, but seems to assume (often incorrectly) that others are the same. Although she is kind-hearted, Sierra has a tendency to be self-absorbed and more than a little clueless, as she can't figure out simple things, but has the greater knowledge to figure out complicated things, and explain them later (but forgets that part, alot). Sierra's personality also has signs of her being a bit depressive, as she is usually questioned about her happiness
Sierra believes in only using violence as a last resort (if she can't think of anything else to do). When she is angered or forced to fight, she is stern and willing to ensure that all tragedy is stopped. She sometimes holds people in contempt. Sierra is sometimes shown as being rebellious, as she is usually in trouble, or up to no good. She also lets her bad things slip off of her, but other's problems stick to her, and she tries to help any way she can. 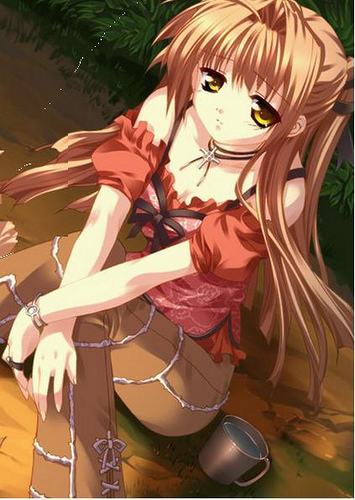 History:
Sierra grew up in Manhattan, New York. She lived a rather normal life with two brothers, and parents that she thought really loved them. She and Jay are the youngest Prestons. Sierra grew up with the idea of not being serious, and just letting things brush by, and not being in a hurry like most people. Jay thought their parents were being "loving" when they left her and her brothers in the streets. The siblings just decided to move on with their lives, and they eventually grew close.
Sierra lives her life the way she wants, being as care free and careless as possible. If she's not with her brothers, she can be found reading in Forks, sitting on a railing, or can be found talking with people. She has no set posse, as she is almost never seen hanging with a group, since she isn't as socialable as most would think. She isn't bothered with not knowing who her parents were, but sometimes she wishes she knew them and if she is anything like them. Sierra doesn't let herself be bothered by what people think, which is why she is care free and careless. She doesn't let herself be bothered by what's happening around her, unless she gets involved somehow. Sierra believes that people can have the power to change, if they really try. She recently had her name legally changed from Jessika to Sierra, because she feels she outgrew the name, and wanted to go for something less common. She is currently married to a vampire named Dennis, who she is usually seen with alot. A few months later, Sierra became pregnant. Dennis didn't want to keep the baby, so she left him, not wanting to give her own kid up for adoption.

Other Talents:
- Talented in singing

That eyething was Justin's idea at `H`

Posts : 54
Join date : 2009-01-19
Location : Somewhere.. over the rainbow
No o_o
Like I said, my camera's retarded.
It was really bright in ym room when Sarah did my make-up.
My camera made it all dark, thus making the eye liner and mascara and eyeshadow bring out my eyes, and make my pupils look huge, if that's what you mean.

AHA YES HE IS HERE
His char is Micheal
ArmyVeteran235 = Justin