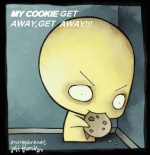 Personality: Is not easily offended, execpt when offended about his vision. He enjoys a laugh with his friends. He is very curious about all the 'pale' people in Forks. He thinks they are sorta 'freaky'.

Physical: Dark, long, spiky hair, that he keeps under a banadana. A bit unnaprochable from a distance, but a loyal friend.

History: He was born into a rich family in France, but his nationality is English. He moved to Forks after a argument with his family. Just a few months after his move to Forks, his family disappeared without a trace. He acts as if this didn't bover him, but it did, but not majorly. He has had his short-term memory wiped twice, both by werewolves, after he found out about them. When he was punch the first time, the only effects left on him were a bruise. The second time it happened, it left a devastating effect. Matt lost his vision, but he has managed to adapt to sonar vision. He carries a walking stick with him everywhere, that doubles as a katana.